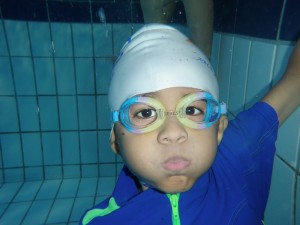 To start with, my son was so terribly afraid of water that whenever we go for a swim, he would just stand around in the shallow pool. He refused to put his head under the water or go down the slides unlike his younger brother. It was such a pain seeing him like that.

So, when a friend recommended “Able Aquatics” to me, I immediately contacted Mr. Shawn Chua who arranged for me to come for his Wednesday 6.15pm lessons.

After only the first lesson, my son was already able to put his head under the water & fondly called his coach ‘Uncle’ Shawn! From there, I knew my son was off to a good start.

Mr. Shawn was very patient, friendly yet firm with the kids. Initially, he’ll leave the last five minutes of lesson time for the kids to relax by playing around the water & he plays with them too! Out of goodwill, he distributes sweets to the children at the end of every lesson. Shawn really knows how to build camaraderie with his young students. Seeing just how great he is with kids, it is no wonder my son always look forward to his weekly swimming lesson.

My son has shown much progress since he started his lessons and I could see for myself that there is a progression with his water confidence level with each passing week. Now, he is no longer afraid to go down the slides at the pool and is now having so much fun playing with his brother in the kids’ pool. In fact, just after 6 weeks of lessons, he has asked to stop his lessons because he really is no longer afraid of water! Amazing!!

I would highly recommend Shawn Chua from Able Aquatics to any parent who has water-phobic children like me as I consider him truly competent in his field. I would also like to take this opportunity to express my utmost gratitude to Shawn for helping my son overcome his fear of water in such a short period of time.

Shawn, thank you, I really truly appreciate it.

error: Content is protected !
1
Hello there!
How can we help you today?